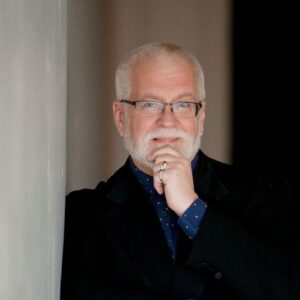 R.L. Rowsey has spent his lifetime wonderfully immersed in the arts.  From his youthful days in Richmond, Virginia filled with piano lessons and church choirs and high school plays, R.L. has continued his love for the arts in a diverse and exciting career.  After studying voice and piano at Virginia Commonwealth University and musical directing dozens of musicals at local theatres, R.L moved to the Washington, D.C. suburbs and spent a number of years in the arts community there.  From serving as musical director for a new American opera, to singing the title role in Michael Nyman’s The Man Who Mistook His Wife for a Hat, to teaching at The Kennedy Center for the Performing Arts, to teaching and directing for The Studio Theatre and Woolly Mammoth Theatre Company, R.L.’s time in the D.C. area was rich and fulfilling.  Eventually, R.L. left the area to tour the country as musical director and conductor for a number of national tours of Broadway musicals.  A quick return to Richmond as the associate producing artistic director for TheatreVirginia, and R.L. was back on the road first as conductor, then company manager, and finally general manager for one of the nation’s leading producers of national tours.

Fifteen years ago, it was time to leave the hectic pace of commercial theatre. R.L. moved to Hailey, Idaho to work with Company of Fools, a professional theatre company which is now a part of the Sun Valley Center for the Arts.  During his time in Idaho, R.L. has once again immersed himself in the arts scene and in the community.  In addition to his work as artistic director for Caritas, R.L. is also currently Operations Director for the Sun Valley Music Festival and the musical director for Light on the Mountains Center for Spiritual Living.  R.L. also spends time as a clinician, coach, and adjudicator throughout the region.  After all of these amazing experiences, R.L. still delights in every opportunity to be of service throughout the community and after a lifetime of love and support from friends and family, still deeply cherishes each quiet moment in his cozy home with the most loving family.